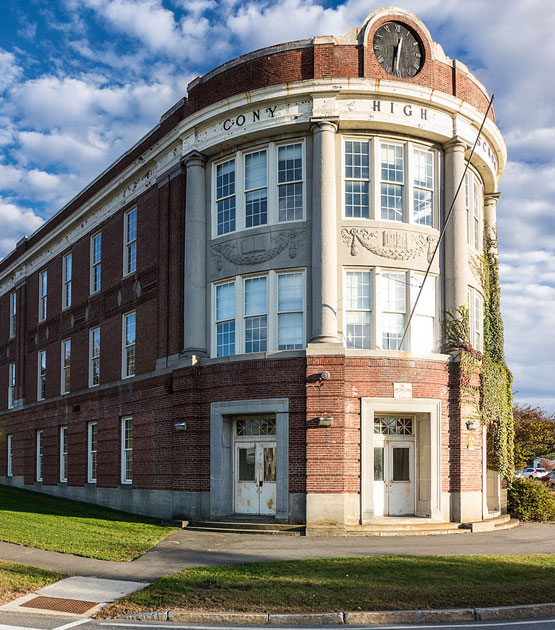 The History of the Cony Flatiron Apartments

Built from the mid 1920s-early 1930s, the former Cony High School is referred to as a “flatiron” building due to its wedge-shaped (or “flatiron”) shape.

In the decades to follow, some of the school’s students would move on to become nationally and internationally-known personalities, including actor Richard Dysart and ballet dancer/instructor Alphonse Poulin.

The three-story building served as a school until 2006: after that time, the City of Augusta maintained the structure for use as a heated storage facility.

The building was named after its benefactor, Daniel Cony. Born in Stoughton, Massachusetts in 1752, Cony practiced medicine for many years before entering the public realm as a representative, senator and member of the executive council. He’d eventually go on to hold office as a Kennebec County judge and serve as a convention delegate for the Maine state constitution.

A strong advocate for education, Cony was said to have liberally funded an Augusta-based academy for female students, leading the local school officials to name the local high school in his honor well over a century after his death.

The historic Daniel Cony clock remains in the building in its fully-restored state. An inscription on the clock’s face reads “Presented by Hon. Daniel Cony. Time Is Fleeting.”